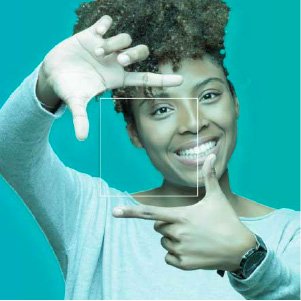 I recently heard an L&D Manager commenting how odd it was that university educated employees were just as likely to expect a structured learning environment at work as his people who had learned within the constraints of the school system.

His assumption was that the more open-ended learning environment of HE permanently changes people’s attitude and approach to self-development.

This made me wonder whether our attitude to work is influenced more by cultural expectations than learned ones? Could it be the case that employees expect workplace learning to still reflect training on the early production lines or in the pre-industrial revolution apprentice models?

If it is, then developing a culture of continuous learning may require more of a focus on supporting change. As an industry we’ve not made enough impact over the past decade mandating or nudging people to take more responsibility for their learning through often LMS-focussed campaigns that promote ‘self-directed learning’’. They struggle to cut through longer term, even when a compelling case for the ‘why’ and the ‘how’ is presented.

A movement not a mandate

In his book The Barcelona Way, Professor Damian Hughes suggests that we approach change through creating a movement, amplifying the behaviours of those in our organisation who are modelling the future state we aspire to. 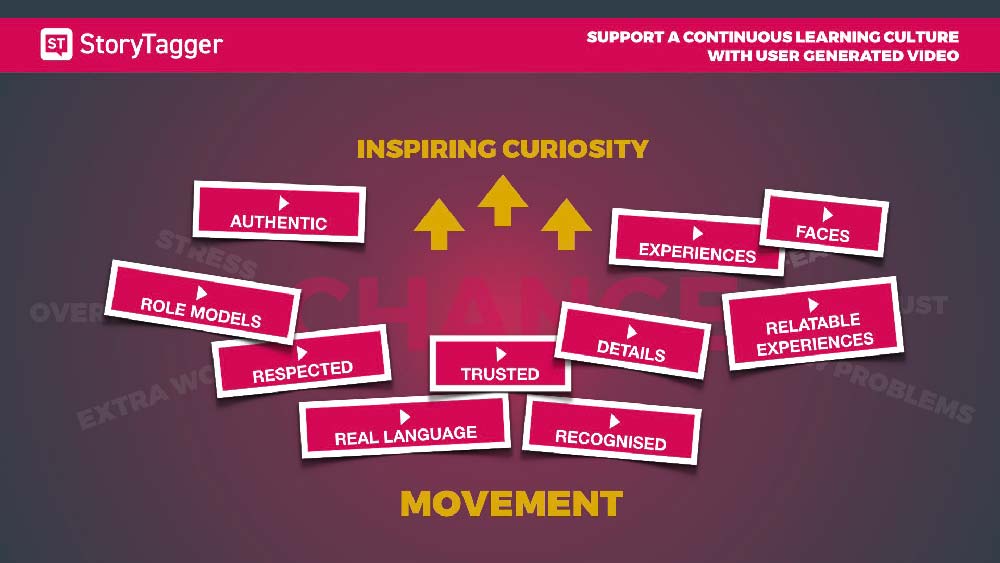 Video interviews are a powerful way to amplify the experiences of our people.

When we use video storytelling to inspire curiosity, we surface experiences, language and details from people who are already trusted and respected in the workforce.

Through the voice of the few we can inspire the many.

However, the problem that typically surfaces when trying to curate video interviews is that our influencers often work in hard-to-reach locations.

In the old world we’d knock on the door of our budget holder with an eye-watering cost for filming, or resort to a telephone interview to write up articles that struggle to reach the people we need to engage.

Watch our recent on-demand webinar for more on this topic. 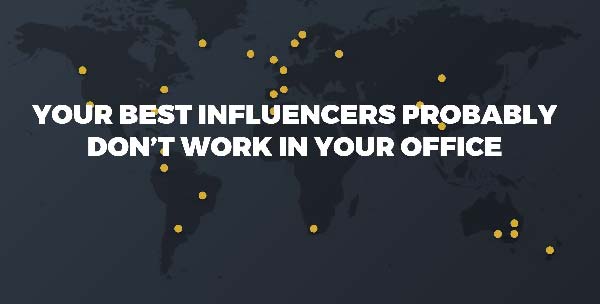 It’s a great question and we set about finding out why this hadn’t already happened at scale. We found the following challenges typically stop people from sharing work experiences on their phones:

However, when you overcome these problems using a tool like StoryTagger, it’s possible to truly democratise sharing reflections, ideas, tips and knowledge. Structured storytelling brings these experiences and behaviours into sharp focus and you can use this content to support many of your priorities.

Personal video doesn’t just feel more authentic, it is more authentic. Digitally, it’s the closest thing we can get to face-to-face meetings.

We believe that sharing this kind of content can support some of the biggest challenges organisations are facing in this new decade – from digital transformation to the development of future skills.

Success really does start and end with your people. 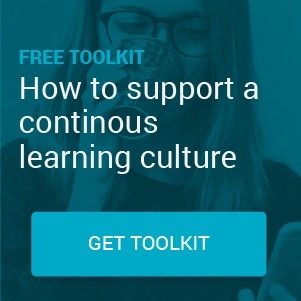 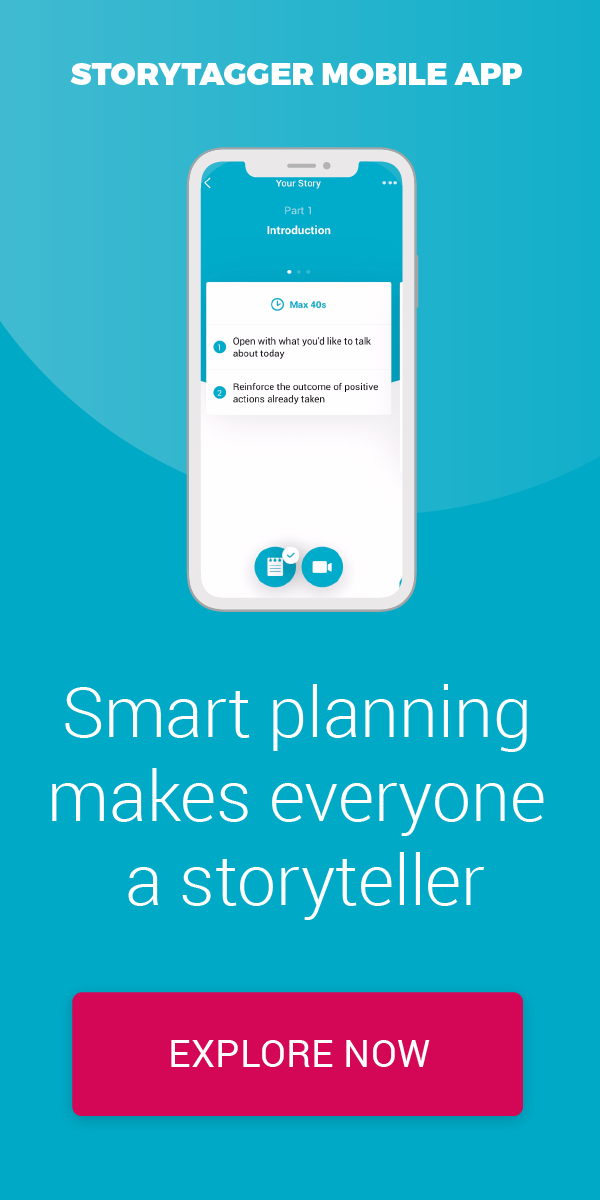 Get resources by email

Discover how user-generated video can work for your organisation with our latest guides, good practice examples and product updates.

How user-generated video is increasing engagement with leadership programme The EDF Energy learning team has a reputation for innovation so we were particularly honoured to share the stage with Carl Lovett at Learning Technologies 2019. In his case study talk, Carl...
FULL ARTICLE

Kickstart user-generated video as part of your 2020 learning strategy

Not everyone relishes the prospect, but filming ourselves is becoming an essential 21st century skill. This article, written by our CEO Cheryl Clemons and originally published in Learning Technologies magazine, shares why user-generated video is essential for learning...
FULL ARTICLE

In this article Cheryl Clemons highlights three business areas that benefit from the real, human and inspiring qualities of user-generated video which can help with building trust in teams. Originally published on the Saba Lumesse guest blog in December 2018. What do...
FULL ARTICLE

User generated video: How student storytelling will become your most valuable marketing tool

Starting university in 2020 is going to be different. How will institutions successfully onboard students to prepare for university life and feel part of a community during the pandemic? Is student storytelling the answer? Watch StoryTagger co-founder Carl Hodler in...
FULL ARTICLE

10 work challenges we can solve with user-generated video

A growing number of L&D teams are figuring out new ways to overcome some common challenges at work. Keep reading to discover how user-generated video is delivering significant impact and overcoming 10 of these important challenges at work:Here’s 10 ways...
FULL ARTICLE

Here at StoryTagger, we love learning podcasts. So, to celebrate National Podcast day, our COO Carl Hodler has listed some of his favourites below. They're a mix of learning, future of work and sales themes. Podcasts are such a great learning media. Carl tells us he...
FULL ARTICLE

How can sharing the effort of our experiences increase performance? Our CEO and Co-Founder Cheryl Clemons shares her insights.   Bragging and the empathy gap Brag posts on social media are one of the double-edged swords of modern life. We all know someone who only...
FULL ARTICLE

What is employee engagement and why is it important?

Our modern working environment as we plan for economic recovery will need to be more flexible than ever. Businesses which prioritise making sure their employees stay safe, informed, satisfied and challenged should see positive increases in employee productivity and...
FULL ARTICLE

How to help remote teams feel connected and share knowledge

With the rise of the gig economy and homeworking it’s important to help people working in remote teams to feel connected. If they aren’t aligned to your shared mission and purpose productivity, morale is in danger of dipping. It’s not easy to keep a dispersed team...
FULL ARTICLE

How can university marketing teams help students navigate through the current crisis?

‘I think it’s probably been the biggest experiment in the history of mankind, where we've taken a billion students and asked them to do what they're learning online.’ How have recent events impacted university students starting their course this year? Marketing and...
FULL ARTICLE
Your privacy is important to us. We also use cookies to improve your browsing experience. GOT IT!